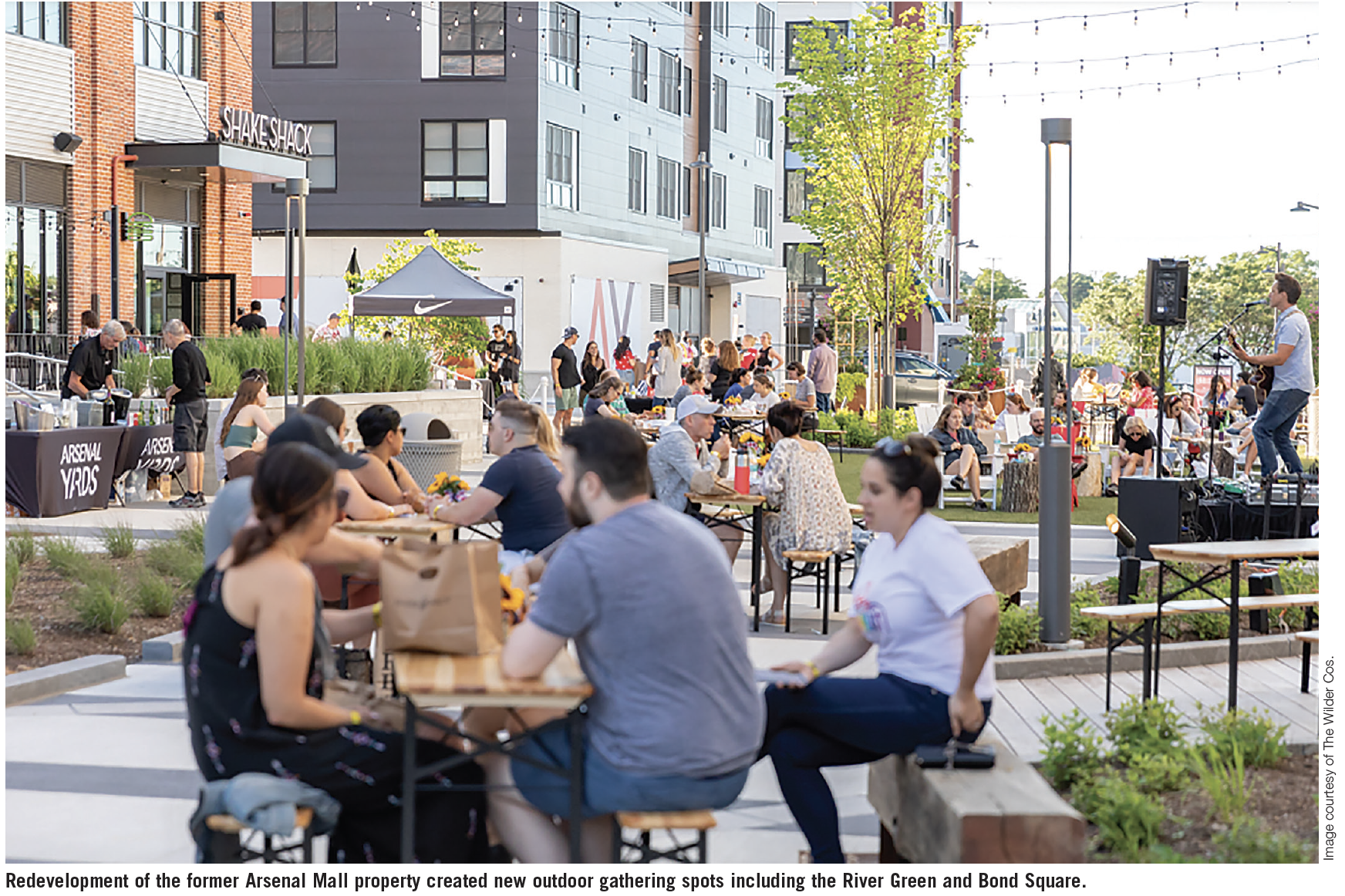 In 2013, with thoughts toward complete redevelopment, The Wilder Cos. and development partner Boylston Properties purchased what was then known as the Arsenal Mall in Watertown from a large national REIT.

The Arsenal Mall had unfortunately made the list on DeadMalls.com. It was a B-level center with mediocre sales, growing vacancy and an uninspired 1980s addition detracting from two historic brick buildings.

At that time the societal impacts of ecommerce and desire for authentic experiences were just starting to gain momentum. These were the major factors informing the vision of turning a tired mall into a different kind of gathering, living, working and shopping environment. It became our mission to create a place of real connection for people. It was the beginning of what would become Arsenal Yards.

What was not known then was how starting in March 2020, the world would rapidly change and accelerate the desire for commerce, culture, recreation and social experiences set together in one compelling location. This turn solidified our commitment to create a mixed-use development that would serve as a vibrant gathering place for residents and workers in Watertown and surrounding towns.

Today Arsenal Yards is in its final stages of development. It is now a thriving neighborhood of 250,000 square feet of retail, restaurants, entertainment and services; 400,000 square feet of life science and office space; 300 contemporary apartments; and a 150-room Hampton Suites by Hilton hotel.

A Vision for Expanding Commercial Base

It was the multi-disciplinary teams at Wilder and Boylston Properties collaborating with the town of Watertown, PCA Architects and a roster of creative professionals that brought the neighborhood to life.

It started with working with the town to complete a comprehensive plan to balance the growth of Watertown’s commercial tax base with the protection of the integrity and scale of the community’s various villages. Dozens of public meetings were held to establish new zoning guidelines for the commercial core. This resulted in the creation of a Regional Mixed-Use District (RMUD) encompassing the east end of Watertown bordering Cambridge and Boston. The RMUD contains carefully crafted zoning that allows for the appropriate mix of uses, increased height and floor area ratio and architectural and signage guidelines. Having the RMUD in place allowed us to truly master-plan a new neighborhood.

This was when the fun began. The challenge was how best to incorporate the mix of uses and still maintain the sense of connectivity, authenticity and vibrancy that would make for a great neighborhood. We started with focusing on the original brick buildings dating back to the Civil War and were inspired by the context and character. The Arsenal was once home to a very large assembly line, where thousands of men and women worked. Our Eldridge Avenue is named after Abby Eldridge, a worker’s rights activist who worked at Arsenal in the late 1800s. These folks created gears, cannons, trucks and tanks. The original steel beams, embossed brick and several gantry cranes were still there.

This informed both the architecture of the new buildings and the uses that we would target on the ground floor: high-quality, high-service grocer Roche Bros.; the best movie experience in Boston, The Majestic7 (that gantry crane is now in the theater lobby); great local restaurants such as Buttermilk & Bourbon and Condesa Restaurante Mexicana; and in-demand fitness uses such as Pure Barre, Central Rock Climbing Gym and F45. Complementing these uses with relevant retail operators that have evolved to multi-channel brands, such as Nike Unite and Ulta, we started to build a merchandise mix that would service both the on-site workers and residents of surrounding communities.

Arts and Activations on Tap for Summer

With an ongoing commitment to placemaking, today’s Arsenal Yards also features local and national artist-created murals, gathering spaces in Arsenal’s River Green and Bond Square areas and a new connection to the revitalized Arsenal Park continuing down to the Charles River. Activations include fitness classes, a picnic series and fire pits. This May through October, Waltham-based Mighty Squirrel Brewing Company is on tap to host a beer garden and serve up local favorite Cloud Candy. Adding more local flavor is a series of rotating pop-up merchants, such as Wicked Dog Apparel and Too Tempted.

Arsenal Yards is a grand vision realized. Retail is approaching 100 percent committed. The life science space is 100 percent leased and will bring close to 1,000 employees when fully occupied later this year. The residential buildings, known as Blvd & Bond, are nearly 100 percent leased.